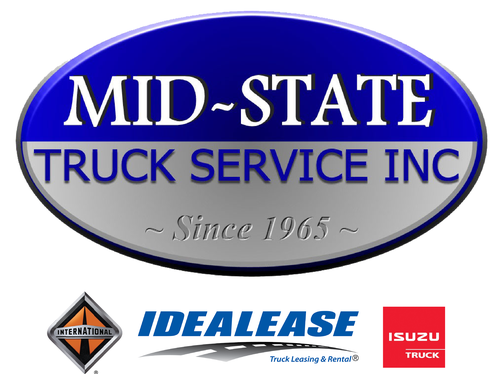 Mid-State Truck Service, Inc is a second-generation family owned and operated Full-Service Dealership, established in 1965. With 8 locations, spanning across Central and Western Wisconsin and now into Northern Minnesota, Mid-State Truck Service provides the region with a wide selection of New and Used, Medium and Heavy-Duty Commercial Trucks as well as School and Commercial Buses. In addition, we also offer Commercial Truck Leasing and Daily Truck Rentals through Idealease. Our Full-Service, All-Makes, Service Department is staffed with highly skilled factory-trained technicians. Our Parts Department carries an extensive All-Makes Parts inventory. Additional services include: Full-Service Body and Recon Shops as well as offering an array of Financing Capabilities.


Our Journey Since 1965 . . .
On September 1st, 1965, Mid-State Truck Service, Inc., founded by Frank Vandehey, became an authorized International Truck Dealership in Marshfield, WI. Commercial truck leasing and rental, as well as the International School Bus franchise for the state of Wisconsin, was soon added to our profile. In the late 1980's business grew, resulting in the expansion to two additional Wisconsin based locations, in Wisconsin Rapids and Plover. After 34 years as General Manager and President, Frank retired in 1999 and turned ownership over to his two sons, Jon and Tom Vandehey. Following in their father's footsteps, in 2005 Jon and Tom expand the Mid-State footprint further and acquired four additional Wisconsin based dealerships, in Abbotsford, Chippewa Falls, Eau Claire and Wausau. Almost a decade later, the need to continue meeting high market demands resulted in the consolidation of the two Chippewa Valley locations, into a new, larger and more efficient facility. In 2013 Mid-State Truck Service announced the addition of the Isuzu Commercial Truck product line, adding regional support for sales, service, parts as well as truck leasing and rental. In 2016 a much-needed expansion was finalized at our Plover facility, doubling the shop's size as well as updating other areas, all geared towards creating a better customer experience. In early 2020, Mid-State Truck Service once again expanded its dealership network and acquired two Minnesota locations, one in Duluth and the other in Virginia. These newest acquisitions have significantly increased our Mid-State Truck Service outreach and market territory. Since 1965, no matter where our journey has taken us and where it will lea

Category: Automotive/Mechanics
Job description Mid-State Truck Service is looking to hire a Full Time Parts Runner to deliver and pick up parts for the dealership. The Parts Runner will drive a company-provided vehicle and will lift and transport parts weighing up to 70 pounds several times a day.Deliver parts and equipment to customers, satellite stores, and vendorsPick up parts and equipment from customers, satellite stores, ...read more
Contact: Brittany Tomac
hr@midstatetruck.com
Phone:(715) 406-4247